Unknown (presumed to be moderate)

AWP-snipe is a boss that was released on a unknown release date. It is on the TESTBED bosses branch because of it being blatantly overpowered.

AWP-Snipe has lots of firepower. Its minons are strong and could kill tanks in 5 seconds. The Ranger turrets don't have a lot of damage and reload, but have high speed and health. The Grunt turret has low damage, but very high reload. The main turret has high bullet damage, health, speed and penetration and low to moderate reload.

currently does not spawn

You need 3-5 Hexa Builders to block out bullets. Tri-Planters can do as well.

Now get a fast tank, like a 3-reload Shooting Star to distract the boss and minions. Shield-Angle may be effective as well. All Booster and Rocket branch tanks are highly effective. Smasher branch tanks (particularly Mega Smasher and Smashception branch) can be used, but are very risky. DO NOT KILL THE MINIONS, SIMPLY DISTRACT THEM!

Now get a Splitter and a high DPS tank like Kasane to drain heath. The acid is needed because it will melt AWP-Snipe's heath .Now just have 2 Skimmers to do damage to the minons. 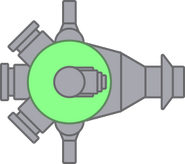