Playable
The Airship is a Tier 4 Tank, upgrading from the Spawner, Navyist, or the Auto-Propeller. It controls a special type of minions, called "Blimps".

The Airship features a circular body. It has a short and wide trapezoid mounted on the front. Under it, there's a longer and thinner trapezoid, with the longer edge facing out.

Tri-Angle without the front gun.

Minion Stats
(compared with the Spawner)

x0.7
The minions are produced more frequently than the Spawner does. They also have more health, damage and penetration. The speed is increased a bit, but drag is also stronger.

The minions has an ability to turn invisible when idle. Turning override ON can stop the minions, and make then invisible.

The minions' bullets has more health and damage, and generates more recoil (In total). They don't travel so far.

The Airship upgrades from the

The Airship can upgrade to the 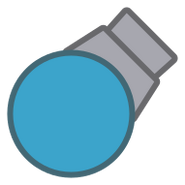 The Airship with transparent background.
Community content is available under CC-BY-SA unless otherwise noted.
Advertisement