In-game
The Airway is a Tier 5 tank that upgrades from the Dirigible at level 60.

The Airway spawns 8 drones that have little propellers on top of them, much like the tank itself.

The Airway upgrades from the 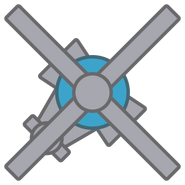 A high-res image of the Airway.
Community content is available under CC-BY-SA unless otherwise noted.
Advertisement