The Annexer is a Tier 4 tank that branches from the Auto-Machine, the Auto-Pelleter and the Submachine at level 45.

The Annexer has a circular body and a combination of barrels: three thin, firing guns and two decorative bands. It also has an Auto Turret mounted on the top of its body.

The Annexer's bullets are very small, fast, and damaging, but do not have a lot of penetration.

The firing pattern of the Annexer is peculiar in that it fires in a zig-zag motion, acting like its barrels are rotating. The Auto Turret however, fires bullets like a normal Auto Turret would.

The Annexer upgrades from the

The Annexer can upgrade to the following: 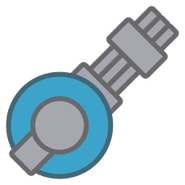 A high-res picture of the Annexer.
Community content is available under CC-BY-SA unless otherwise noted.
Advertisement