Antivaxxer is a Tier 4 tank that upgrades from Contagion at level 45. It upgrades into Flat Earther.

Antivaxxer features two nested barrels inside of a trap launcher.

With some trial and error, the bullets can be stacked. The traps deal the same damage as the Contagion's traps, and the bullets are slightly less powerful, though combined are stronger. 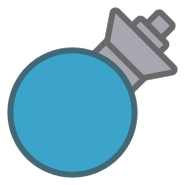 A high-res image of Antivaxxer.
Community content is available under CC-BY-SA unless otherwise noted.
Advertisement