Ingame
The Apidae is a Tier 5 tank upgrading from

Colonist at level 60. It is commonly used for hunting.

The Apidae shoots swarmers, similar to the Colonist, which spawn swarm drones. Swarm drones deal low damage and have a time limit but have high speed and are numerous. The swarmers themselves also deal moderate damage. However, the swarmers have more barrels on them, allowing them to spawn more swarm drones.

The Apidae upgrades from the Colonist at level 60. Being a Tier 5, it does not upgrade.

Please do not use Apidae for hunting. Repeated hunting may get you kicked or banned. 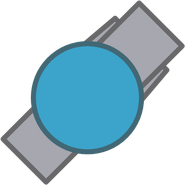 A high-res picture of the Apidae
Community content is available under CC-BY-SA unless otherwise noted.
Advertisement