this is page about Boss for crasher see Aquamarine (Crasher)

The Aquamarine is a boss that was secretly added on March 27, 2018.

Aquamarine has a cyan tri-quarter circle base with a drone spawner at the back, and three Mega Trapper turrets on top.

Aquamarine has a medium movement speed and high health, higher than most bosses. It does not have any auto-turrets, and its mega trapper turrets are just stationary turrets like how Celestials' auto-trappers are. Traps of Aquamarine have medium speed and range, high damage, and penetration. Aquamarine also slowly spawns its drones, each of which looks like a cyan tri-quarter circle. Each drone has decently high damage, but a medium speed and health.

Aquamarine is both offensive and defensive boss, rather than focusing one one. It is a challanging boss to defeat in teams, and close to impossible to defeat in solo. Its mega traps protect it a lot, and has deadly drones that have medium FoV. If you are unable to penetrate traps of Aquamarine and steadily deal damage, it will kill you instantly with fast and extremely damaging drones. Only some tanks with either very high penetration or very high DPS will be able to kill Aquamarine, as its drones have a LOT of health, even higher than Professor's drones. Also, Aquamarine has awkwardly small hitbox at middle, so bullet spammers may have a lot of trouble at precisely aiming at hitbox.

Aquamarine usually spawns with 1 or 2 more nest defender bosses, and when it does, it can slaughter team of tanks without significant problem. Aquamarine's mega traps and drones provide perfect temporary fort for bosses, so it is advised to kill Aquamarine first.

One strategy of killing this boss involves choosing a Splitter with a glass-build, with high reload and penetration. You should lead your minions around the boss, dealing some damage to it, and spawning more minions to kill drones. You will deal about 8% of health to Aquamarine on each such attack. Retreat, and repeat until the boss will die.

Another way of killing Aquamarine is by picking Redistributor and slowly sniping and killing Aquamarine from far away. However, this method is not recommended, since it will take a lot of time, and if you will be distracted the boss will regenerate a lot of health quickly. The last way of defeating this boss is having one distracting player and one attacking player. Attacking it in teams is the most recommended way of killing this boss. 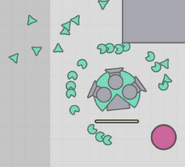 Aquamarine idling near a Splitter

A high resolution image of Aquamarine

Aquamarine locked on a shooting star in pentagon nest
Community content is available under CC-BY-SA unless otherwise noted.
Advertisement