Asteroid is a boss that was added on July 13, 2020. The boss has a playable tank version, Mini Asteroid.

Asteroid has a black circle base, with a Mortar turret on top. Asteroid has four turrets attached to its body, each turret has a Twin auto-turret and five swarm drone launchers.

Asteroid by itself releases a lot of swarm drones, they are not very strong, but can easily overwhelm the player and kill you pretty fast. They act like swarm drones, attacking the closest player. The drones respawn very quickly.

Countering Asteroid in solo may prove problematic because it will strongly focus its firepower on you, and release swarm drones which can slowly sap your health, and eventually kill you. You cannot effectively circle your drones behind the Asteroid, because bullets from the other Asteroid turrets will penetrate your drones. Bullet spammers just will not be able to kill Asteroid before it will kill the player. It has a lot of health, and will likely be able to protect itself from multiple attacking players or groups of players.

Surprisingly, the Auto-2 branch and Splitter can effectively deal with Asteroid. The Auto-2 branch will defend itself from incoming drones but make sure to have some bullet health, penetration, and Shield regeneration, so you can minimize swarm drone damage. Mortar turret secondary bullets can be penetrated, but avoid the primary Mortar bullets. Ideally, you should dodge it. As a splitter, try to keep your minions between you and Asteroid, so you can kill all incoming drones and penetrate the bullets.

If you do not want to fight Asteroid, you can use VPN bullet build, as you will be able to penetrate the drones. 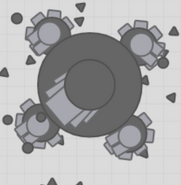 Asteroid locked on someone 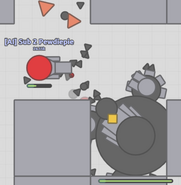 Asteroid attacking a bot in a maze 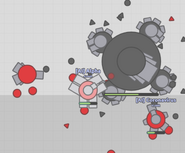 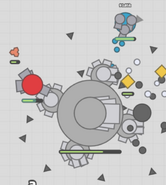 Asteroid being attacked by a Swivel Machine.

Shooting star which has spotted an asteroid.