The Autillery has a wide rectangular barrel in the middle. On the sides, it has two auto turrets.

The Autillery's main barrel shoots bullets similar in stats to the Pounder's bullets. Its side barrels shoot bullets equivalent to

The Autillery upgrades from the

The Autillery can upgrade into the following tanks: 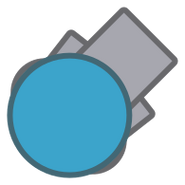