The Auto-Arachnid has a circular body with three

Basic, spread equally around its body, and six smaller guns in pairs between each Basic barrel. It has an Auto-turret on top like the

Flank Guard. Its side bullets aren't as strong, closer to the

Minishot side bullets. Its Auto turret detects nearby enemies, prioritizing more dangerous enemies over others, and shoots Auto-Basic auto bullets.

The Auto-Arachnid can upgrade to the following: 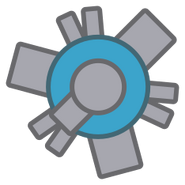 High-resolution picture of the Auto-Arachnid