The Auto-Arsenal has an circular body, an trap launcher on wider rectangle base and an normal auto-turret on top of body.

The Auto-Arsenal can upgrades from

Arsenal at level 45. It can upgrade to fillowing at level 60: 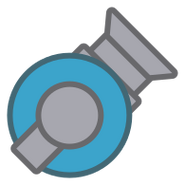