The Auto-Contagion is a Tier 4 Tank upgrading from

Trapper trap launcher on top of a thin barrel that shoots bullets. It has an auto-turret on its body that points at nearby enemies.

The Auto-Contagion fires traps from its Trapper barrel and small, weak bullets from the barrel underneath. Its auto-turret shoots weak bullets at nearby enemies, prioritizing more dangerous ones.

Its FOV is that of Trapper, slightly above average.

Auto-Contagion can upgrade into the following: 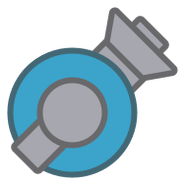