Auto-Tank is a tier 4 tank that upgrades from Auto-3 and the Gunner at level 45.

The Auto-Tank has a circlar body with four turrets spread around its body. Each turret has a small gun attached to it.

Each turret of the Auto-Tank deals moderate damage with their small, fast bullets.

The Auto-Tank upgrades from the

The Auto-Tank upgrades to the following at level 60: 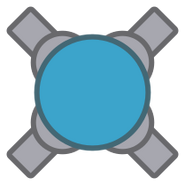 A high-res image of the Auto-Tank.
Community content is available under CC-BY-SA unless otherwise noted.
Advertisement