The Automaton is a Tier 4 Tank that upgrades from

The Automaton has three Minigun barrels attached to an auto turret. They point at any nearby enemies within about a 120° space in front of the tank.

Minigun-2 but with less detection, only a 120° space in front (rough estimate).

Its bullets are small, weak, and fast, with the same stats as Minigun, and are fired with high reload from the barrels. Automaton's FOV is that of

The Automaton upgrades from

Automaton can upgrade into the following: 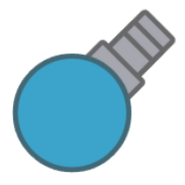