The Ballista is a tier 3 tank that branches from the Pelleter at level 30.

The Ballista's front guns fire small bullets similarly to the Pelleter, although they are a bit larger. They fire at a fast rate and their bullets are below-average in strength. Its rear swarm drone spawner fires AI swarm drones that move quickly and attack whatever is nearby. Being swarm drones, their damage and health is not that high, and they have a limited lifetime, but they come in very high numbers.

The Ballista upgrades from the

The Ballista branches to the following:

The Ballista was suggested by Fillygroove and added to the game on December 14, 2018. 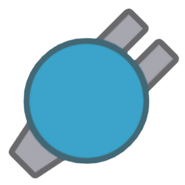 A high-res picture of the Ballista.
日本語
Community content is available under CC-BY-SA unless otherwise noted.
Advertisement