The Basebrid is a Tier 2 Tank upgrading from the Basic at level 15. The main focus of its branch is having 3 uncontrollable Drones.

The Basebrid has a circular body with a Basic gun in front and a drone spawner on its back.

x1
Upgrading to the Basebrid gives the tank an AI drone spawner on top of its Basic gun. This drone spawner spawns independent drones that cannot be controlled by the player. They automatically attack nearby shapes and enemies. A maximum of 3 drones can be spawned by the drone spawner. The Basebrid's bullets have the exact same stats as the Basic's.

The Basebrid upgrades from the

The Basebrid can upgrade to the following: 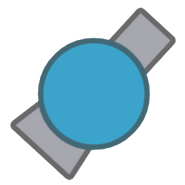 A high-res picture of the Basebrid 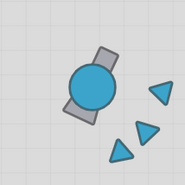 A Basebrid idling with its drones circling it

The Switcheroo in its Basebrid form