The Basic is a famous starter tank in Woomy Arras io. It is automatically chosen when starting a game, excluding testbed events.

The Basic features a simple circular base with a moderately-sized cannon at the front.

The Basic's stats are very average but has surprisingly good strengths for a starter tank.

The Basic can upgrade to the following: 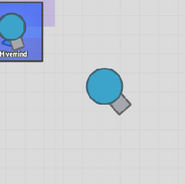 Basic near a Lancer, with a bullet 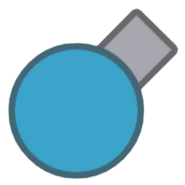 A high-res picture of the basic.

A Basic near a rock