The Chiller is a Tier 3 tank that upgrades from the Sniper at level 30.

Similar to the design of the Sniper, the Chiller has a circular body and a fairly long barrel. Its gun has a short, light-blue bar on top of its barrel and a faint blue aura around it.

The Chiller's bullets have fairly high damage, speed, and penetration, but are fired at a slower rate.

Enemies that are hit by the Chiller's bullets are temporarily slowed down. This includes bullets, tanks, and shapes! Its bullets have a light-blue circle and aura to indicate their slowing properties.

The Chiller upgrades from the

The Chiller can upgrade to the following:

The Chiller was suggested by Fillygroove and added to the game on May 26, 2019. 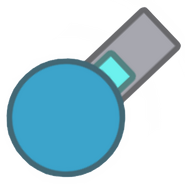 A high-res picture of the Chiller.
Community content is available under CC-BY-SA unless otherwise noted.
Advertisement