The Clicker is a Tier 3 tank branching from the Sniper at level 30.

The Clicker features a circular base with a thin barrel under a short, wide, decorative barrel.

x0.9
The main gimmick of the Clicker is that instead of shooting a single strong bullet, it shoots a number of weak, stacked ones. As a result, the Clicker's attacks deal a lot more damage and knockback, but you have to be hit by all of the bullets to maximize its damage.

The Clicker has a slightly slower reload speed than the Sniper but has the same FoV.

The Clicker upgrades from the

The Clicker can upgrade to the following:

The Clicker was made by moouse#3099 and officially added to the game on July 21, 2018 alongside the Basher, Puncher, and Clipper. 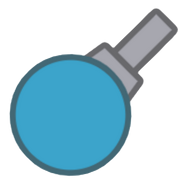 A high-res picture of the Clicker.
Community content is available under CC-BY-SA unless otherwise noted.
Advertisement