Constellation has a strange hitbox: only the gray square can be hit by bullets.

Constellation is an incredibly powerful boss, as its bullets are excellent as offensive and defensive weapons. You will have troubles when attempting to penetrate the bullets and exactly hit the hitbox, while Constellation can steadily deal damage to you. All Constellation's bullets drastically decrease your Shield so you may have a problem regenerating while actively fighting.

The above means, it will be very hard to kill it in solo. It is nearly impossible to outgun it, and very hard to keep minions near you so it cannot damage you. Constellation has a lot of health, so don't be tricked by its small health bar. It has as much health as an average boss. However, its vulnerability is that bullets can only be focused on one player at a time.

Having said that, have a player that distracts Constellation. Whether that's Builder AI or dodging booster, Constellation will focus on it. Still, be vary. You may not be able to kill Constellation before it kills the distracting player, then it will immediately focus on you. If it has less than 15% of health, keep firing. Otherwise, retreat.

As a minion tank, keep minions between the boss either way. It takes great skill to keep part of minions firing at the boss, and the other defending you. Anyway, try to take cover so that you may regroup.

When in solo try using a high penetration tank that can input enough damage to the boss as well as defending you form taking too much damage.

Using a tank like Torrent or Bent Hybrid while circling around the boss can deal enough damage to kill it.When it dies get as far away,you will not be able to kill all the shards fast enough.

The base of the Constellation Core is a yellow square, with a necromancer spawner attached to the turret. The turret has a white fill and a gray stroke. On each side of the base a stationary triplet turret, partially covered in trapezoids is located.

Constellation Core is the weakest shard. It always spins and shoots no matter what, and only its projectiles that lock on the player are necromancer drones.

Bullets and drones are weak and can be easily penetrated.

Constellation Core is very weak since it does not lock on players. It slowly spawns weak necromancer drones, but they have too little health to represent a serious threat. Bullets can be dodged since you can move along with Constellation's Core auto-spin.

Overall, Constellation Shards are far stronger, and it is advised to get rid of them first. If you managed to kill Constellation Shards, killing Constellation Core will not be a problem, but it still has decent health. Bullet spammers are recommended, although minions and drones can also deal with it somewhat efficiently.

The base of the Constellation Shard is a beige irregular convex pentagon, with an auto-turret on top. In front of it, a Pelleter turret is located.

Although Constellation Shard is a miniboss, it is still very powerful. Its bullet speed ends up creating stacked bullets, which do as much damage as Constellation's. The only advantage is that you can outgun it before it kills you.

Constellation Shard should not be underestimated: it can stack bullets and deals heavy damage to the defenseless player. Although, they come in numbers. You still have to be careful.

As a minion tank, just shoot at them while keeping your minions very close. If you are a drone tank, it is more tricky. You will have to retreat while constantly charging one shard with multiple drones while keeping all other drones near you to protect you from incoming fire.

Ideally, you should distract one shard away, then kill it. Then distract two shards, and also kill them. After that lure last shard away from Constellation Core and also eliminate it. This way you can quickly eliminate all shards with decreased danger. 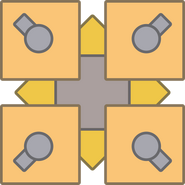 A high resolution image of Constellation

Incognito with a constellation,

Constellation attacked by a splitter

Another incognito and Constellation

Constellation Shards locked on someone in pentagon nest
Community content is available under CC-BY-SA unless otherwise noted.
Advertisement