Cruiser Swarm Drone
The Cruiser is a Tier 3 Tank that upgrades from the Director, the Pelleter and the Twin at level 30.

The Cruiser has a circular body and two small reverse drone spawner guns.

x1.136
Instead of controlling regular drones, the Cruiser controls swarm drones. Swarm drones have a time limit and are fired actively instead of passively respawning. They are also much smaller, weaker, and faster than regular drones.

The Cruiser upgrades from the

The Cruiser can upgrade to the following: 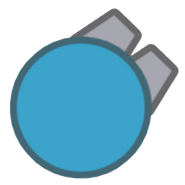 A high-res picture of the Cruiser.
Community content is available under CC-BY-SA unless otherwise noted.
Advertisement