Cutter is a boss that was added with the release of the game.

Cutter has a pink, pentagon base with a large Rebounder turret on top. On each side of the Cutter, Boomer turret is located.

Main and the only ammunition of the Cutter are the boomerangs: pink pentagons with large damage, incredible range, and speed. Its boomerangs have a larger range than Rebounder with maximum bullet speed and have a lot of health and damage. After reaching its maximal distance, boomerangs will return to the cutter with the same speed and then disappear.

The main ammunition of Cutter: boomerangs are far more durable and speedy than its tank counterpart. When focused on a single player, its penetration of all boomerangs is so high, that redistributor bullet deals far less damage, and Cutter will quickly regenarate taking damage. Cutter range is higher than a dominator's: its range is as large as the range of Dropship's minions. Very slow tanks like mace will not work: Cutter moves far faster than a mace without movement speed. Its speed, FoV and boomerang penetration make it extremely powerful against sole targets.

Although it is very hard to beat it in solo, it's firepower will drastically decrease if multiple players attack it. If Cutter is heavily focused on one target, only two auto-turrets will be left. These can be handled by minion tanks and tanks with high penetration or focused fire.

Ideally, three players or two players and powerful AI is needed to defeat the Cutter. In domination, try to make it focus dominators. Although it is stronger than dominators, you will be able to deal it a lot of damage before it will kill a dominator. In mothership modes, lead it to mothership. In team modes, come with two more players. One player will have to avoid 4 constantly firing turrets, while another two will be dealing damage. 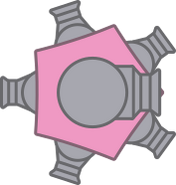 A high-resolution image of Cutter.

Cutter locked on a dominator.

Cutter locked on a shooting star in a maze
Community content is available under CC-BY-SA unless otherwise noted.
Advertisement