The Elite Defender is a boss that was added on September 20, 2019. Currently, it is on the TESTBED bosses branch, mainly due to the fact of how OP it is.

Elite Defender can easily wipe out tanks and groups of tanks in a matter of seconds. Its builder turrets can lock on multiple players at once and Elite Defender will face no problems in defending itself from multiple sides at once. Elite Defender's swarm drones will easily shred any player very fast, so fighting this boss alone or in small is not an option. If you ever see Elite Defender, you should run as fast as you can.

Try to gang up against Elite Defender, as you will not stand a chance if you have less than four players. It will be incredibly difficult to achieve victory if the boss will not be distracted, so try to get a Shooting Star or a Jump Smasher branch tank to distract the boss. The distracting player should primarily keep most swarm drones away from the attacking players, and try to last as long as possible. If Elite Defender is distracted, you should get three players with a high rate of fire and penetration, ideally Twinceptionists, as they have a lower danger value. If you are in a team mode, getting a Builder branch tank would also be useful. Surge can help a lot in the battle if the previous steps are already performed, and the boss will fall even faster. 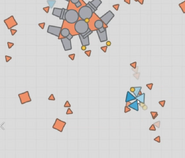 Elite Defender locked on someone 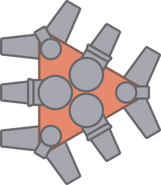