A stirring in the distance...

Elite Gunner is a boss that was added with the release of the game. It was mainly as a TESTBED boss, but then it was secretly added into the game as a spawnable boss.

Elite Gunner has a pink triangle base with two large attached auto-turrets, each has two Gunner barrels. On the back, Elite Gunner has a large Engineer turret. There are also two short spikes in front and in the back of the boss.

Elite Gunner does not have high firepower, and still, it should not be underestimated. Focused fire tanks or Machine Gun branch is the best for killing this boss, as they will be able to outgun it. Drones are not helpful as they will die before reaching the boss. As a bullet tank, you should move in a left-right pattern, in order to trick the boss into missing more. Meanwhile, shoot at the boss, and it will die quickly.

When fighting Elite Gunner, try to move away from it slightly. If you will not, pillboxes may start to protect the boss more, and make the progress slightly harder. Pillboxes have decent speed, but they are possible to dodge, especially if you see whether or not they are going in your direction. 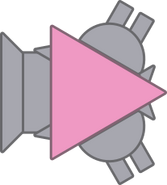 Elite Gunner locked on someone in pentagon nest 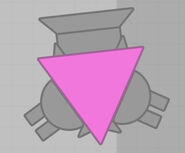 An idle elite Gunner with the classic theme
Community content is available under CC-BY-SA unless otherwise noted.
Advertisement