A stirring in the distance...

Elite Sniper has a pink triangle base with three Sniper auto-turrets on each side.

Elite Sniper has medium speed and it always spins. It has three auto-turrets, but only two can be locked on a single player. The turrets shoot a strong bullet with high speed, penetration, and damage, but have a long reload tiime.

Elite Sniper is not a hard boss to fight, but you have to still be careful. The bullets are pretty strong and can kill you fast if you are unaware of your surroundings or you did not dodge the bullets. They have high penetration and speed but low reload. As such you have two options: dodge the bullets or penetrate the bullets.

As a minion or drone tank, your task is to dodge the bullets. This can be most easily achieved by keeping medium distance and moving in a left and right pattern. Meanwhile, while you are dodging, you should focus your drones/minions on the boss. It does not have a lot of health, so it will be dead quickly because it only has the health as a EK-1.

As a bullet spamming tank, you have the option of penetrating the bullets. Although the bullets seem strong, they still can be penetrated by bullet spammers easily. Simply focus all your firepower on the boss, while keep moving in a left-right pattern.

This will deal heavy damage the boss and kill it quickly.

Another way is to use a Furnace branch or a Pounder branch and shoot and dodge and the boss will be certainly dead guaranteed.

Also you can either use a Blaster branch or use a other tank, its your choice! You do not have to use these tanks if you are skilled. 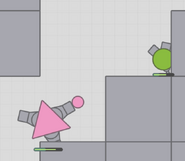 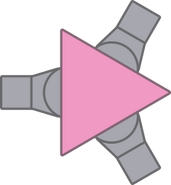