The dead are rising..

Fallen Booster has a gray circular base with one front gun, and four thruster guns at its rear.

Fallen Booster moves with incredibly fast speed and deals heavy body damage, with its main weapon is ramming. Its front bullets are also strong, however, capable of dealing 20% of health to level 60 glass-build tank. Its thruster guns are weak.

Apparently all the Fallen bosses are the souls of the First Tanks (e.g, Fallen Overlord=First Overlord) but out of all of them, we so far only know how the Overlord fell.

The first booster created the art of teaming and a small part of the soul wants to continually remind itself of those days even as it continues to attack its former allies.

Fallen Booster moves with a high speed, ramming its targets and killing them with its body damage, just like diep.io Fallen Booster. Its front bullets have weak penetration but deal with decent damage. As such, boss is more ramming. Most medium-speed tanks and slow tanks just do not stand a chance against Fallen Booster. Tanks with high speed but a low rate of fire will be killed by bullets, tanks with medium speed and high rate of fire will be rammed, and die respectively.

However in both Woomy Arras and Diep io, there is a tactic involving both the said boss and a Booster branch tank. It is preferable to have enough movement (bullet speed and reload and base speed) on par or slightly over Fallen Booster's, and some damage, enough to get its attention.

Get it to chase you around. Get it to ram into EVERY SINGLE THING YOU WANT. Feel free to kill it via Alpha Pentagon. Or get it into your enemies' faces booyah instant instrument of destruction.

Shoot it every once in a while to keep it interested. 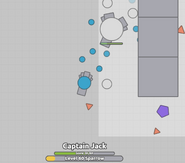 Sparrow running away from Fallen Booster. It appears to be using the Booster Branch-Fallen Booster strategy, but who knows.