The Fueron is a Boss that is on TESTBED Bosses branch. Its in TESTBED mainly due to the fact of how OP it is.

Fueron has INSANE firepower and damage, its Planer turrets can instantly make anything, and everything, destroyed. It is also best to go behind it, because you are only locked on by the Shotgun turret and you will be screwed if your team is dead. Because if you are in teams, then this can be easy. Going in front of it is not a good idea due to the fact that you will get shredded by it and its ramming damage.

It is also good to have at least 7 Hexa Builders to help and block Planer Turrets, because you will have to dodge if there are no defenses or players. It's Shotgun Turrets also make a dent to the blocks due to the fact that Fueron is based onto the Mega Crusher. This will advise you to not ram it, you just have to charge all your firepower and bullets into it while the Fueron is low health, and deal HIGH damage, and eventually kill it in 4TDM or 2TDM. You can also use Torrent and Splitter, and also the whole Optic branch. You will need 3 of these, 4 Atrophy for healing, but thats optional. Get at least 4 Torrent and 5 Splitter to kill it. If you killed it, Congratulations! You defeated the most annoying boss in some people's opinions! Unless you are one.. 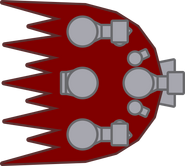 a high res picture of Fueron
Community content is available under CC-BY-SA unless otherwise noted.
Advertisement