The Hivemind is a Tier 4 Tank that upgrades from the Basic at level 45. It is similar to the Basic; however, it spawns two identical minions, called probes, that increase its firepower and can flank opponents.

The Hivemind looks exactly like the Basic but with thicker edges. The Hivemind's minions are identical in size, design, and firepower.

Like other minion tanks, the Hivemind's minions circle the player when idle unless autofire is on; otherwise, they rotate about the cursor's location. The Hivemind has higher reload but less damage than the Basic and is also faster than the Basic.

The minions have between one-tenth and one-fourth the health of the player. With most bullet builds they have about one-fifth.

The Hivemind upgrades from the

The Hivemind can upgrade to the following: 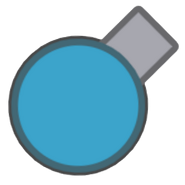 A high-res picture of the Hivemind. 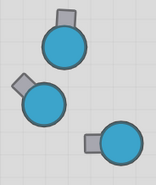