The Huntress is a Tier 3 tank that upgrades from the Sniper at level 30.

The Huntress has a circular body with a long, tapering gun in front.

The Huntress's bullets are identical in power to the Sniper's.

x1
The Huntress fires strong and fast bullets at a slow rate, like the Sniper.

The special ability of the Huntress and its upgrades is its ability to become near-transparent. The Huntress must not be moving or firing and only takes a few seconds to become invisible.

The Huntress upgrades from the

The Huntress can upgrade to the following:

The Huntress was conceptualized by Hellcat and added to the game on March 11, 2019. Several other invisible Sniper tanks were changed to upgrade from the Huntress as well. 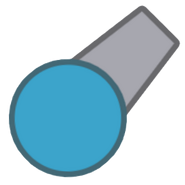 A high-res picture of the Huntress.
Community content is available under CC-BY-SA unless otherwise noted.
Advertisement