The Industrian is a boss that was added with the release of the game. Currently, it is on the TESTBED bosses branch, mainly because of the fact of how OP it is.

Industrian has a white decagon base with a modified Destroyer turret on top. This turret has a white circle in the center and a slanted turret base. The front part of its turret has six lines crossing it, four in the center and two, thicker lines near the sides. Around it, Industrian has five auto-turrets. On the outer sides of its base, Industrian either has a Single turret or drone spawner, which spawns Destroyers.

Industrian has low speed and a lot of health. Its destroyer turret acts like a normal one but has far higher damage and bullet penetration, and high bullet speed. Its auto-turrets, both basic and single, are pretty weak and have low damage, bullet speed, and penetration. Industrian spawns destroyer crashers at a very fast speed and can have up to 20 of them. Each crasher cannot carry Summoner Square, but it still has the same speed, health, and damage.

Killing Industrian is a major challenge since it can perish any tank very fast and has a lot of health. Its crashers are very strong and can overwhelm your terms on numbers and DPS easily. Furthermore, the main turret of Industrian is also very strong and can easily kill any player from a single hit. As such, it is advised to run as soon as you see Industrian, eliminate its crashers, and do not try to deal damage or kill the boss itself.

When engaging in a battle with Industrian, note that it will be very hard to eliminate all the crashers, but you can overwhelm it with sheer DPS if you have multiple players. As such, never fight in solo, but rather in groups of 3+ players. Tanks with very high DPS, like Splitter, considering they can dodge the bullets of the main turret, can overwhelm Industrian. Firstly, make sure your team is coordinated and is ready to attack in one direction. Secondly, try to cover as much area as possible so that drones will not be able to out-flank you while penetrating bullets of Industrian. Having a poison tank will also help since the bullets will hit the boss and deal extra damage. 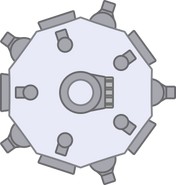 A high resolution image of Industrian
Community content is available under CC-BY-SA unless otherwise noted.
Advertisement