Kiosk is a boss that was added in December 2019.

Kiosk has a rounded square base, with an Assassin turret on top of it. It has two auto-turrets in front of it, and a drone spawner on the rear.

Kiosk has strong bullets, they have high speed, damage, and penetration. Kiosk can focus its auto-turrets only on one player at once.

Kiosk constantly spawns strong drones, with unique mechanics. Kiosk's drones will firstly circle around Kiosk, increasing their distance from the boss. When a drone will notice a player in its FoV, it will start attacking it. Drones have rounded, green square shape.

Kiosk has surprisingly high firepower and can kill a player very fast. Its bullets may be a large problem to penetrate, but tanks like Minigunner are still able to do it. Kiosk has less health than most bosses, and moves with a low speed, but can defend itself pretty easily. Its drones are strong, can outflank players, and easily outgun them. As such, do not try to fight Kiosk in solo.

Kiosk can lock on its auto-turrets only on one player at a time, so having a player who distracts a Kiosk is very effective. Kiosk will focus its auto-turrets on the player while being far more vulnerable. Its drones are still strong, so tank with a high rate of fire will be ideal. If there are drones near you, kill them first, and then continue attacking Kiosk.

It is not recommended to fight Kiosk in solo, but if you are skilled, here are some tips. Firstly, try to move left-right so Kiosk will miss at least some bullets. Secondly, try to eliminate drones that are near you, and keep the maximum possible distance from Kiosk. This way, you will have more time before drones will start targeting you.

Kiosk locked on someone 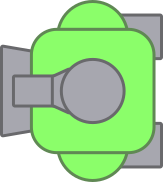 A high resolution image of Kiosk

Kiosk locked on a skywalker in a maze
Community content is available under CC-BY-SA unless otherwise noted.
Advertisement