The Lancebrid is a Tier 3 tank that upgrades from the Lancer and the Basebrid at level 30.

The Lancebrid has a circular body with a triangular lance in front as well as a drone spawner facing backward.

Like the Lancer, the Lancebrid wields a lance that deals heavy damage at close range. This can also be used to block enemy bullets and other attacks.

Its AI drone spawner spawns uncontrollable drones that automatically chase and attack nearby enemies. It can spawn up to a maximum of three drones.

The Lancebrid upgrades from the

The Lancebrid can upgrade to the following:

The Lancebrid was an idea by Hellcat and was added to the game on December 2, 2019. 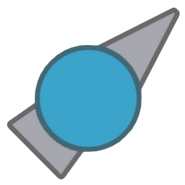 A high-res picture of the Lancebrid.
Community content is available under CC-BY-SA unless otherwise noted.
Advertisement