The Minishot is a Tier 2 Tank that upgrades from the Basic at level 15. The main focus of it branch is the extra barrels secondary bullets, looking like the Pelleter's Pellets.

The Minishot has a circular body and three guns: one main gun facing forward and two smaller guns at an angle on each side of the main gun.

x1.2
The two secondary guns of the Minishot provide extra pressure on enemies and occupy the dodging space around its main gun. Its secondary bullets are not as strong as its main one and are fired at a faster rate.

The Minishot upgrades from the

The Minishot can upgrade to the following: 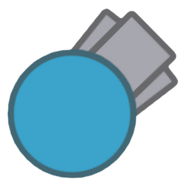 A high-res picture of the Minishot 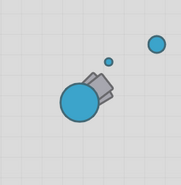 The Minishot firing bullets
Switcheroo (Minishot).pnh
The Switcheroo in its Minishot form
日本語
Community content is available under CC-BY-SA unless otherwise noted.
Advertisement