The Mythical Crasher is a boss that was added on October 16, 2018. Currently, it is on the TESTBED bosses branch mainly due to the fact of how blatantly OP it is.

Mythical Crasher has high health and speed. Its machine guns have weak bullets that deal little damage but accelerate boss a lot. Gunner bullets have mediocre penetration and speed, but high damage and are fired at a fast rate. Traps have little health and penetration, but high speed and lethal damage, and hexa trapper turrets always spin. Basic and destroyer bullets have nearly the same stats, are fired at a decent rate, and have immense damage and penetration.

Currently does not spawn. If you do see this thing, you have only one option. RUN IF YOU WANT TO LIVE. JUST RUN.

Mythical Crasher has high health and speed, albeit slightly slower than Comet. It has incredible firepower, capable of shredding anything it locks on and can easily catch up on tanks with medium movement speed. This makes Mythical Crasher a very dangerous boss that is very hard to kill, and as such, you should try to run away whenever you see it. If you are a Propeller branch tank, you should not have any problems in running away. Other tanks are usually screwed and have no chances to escape if Mythical Crasher locks on them.

Killing Mythical Crasher is a major challenge, far harder than killing any normal boss, and many TESTBED bosses. Never fight alone or in small groups - you will likely die. Fight in groups of at least four players, though more players are advised. Firstly, you should get a Booster branch tank that will distract the boss, and lure it into the corner. This player should maximize movement speed and health, and try to keep a long distance. Prepare an ambush in the corner with two Surges and a tank with high DPS, ideally a Flail. When the boss enters the corner, surges should stun it behind the rock, and keep it stunned. In the meanwhile, flail will deal high damage to the boss, and eventually kill it. Using Surges is advised as without them you will need far more players to penetrate the bullets and deal damage to the Mythical Crasher. VPN is not effective as the boss is fast and its ammunition protects it a lot. 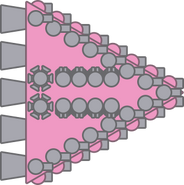