Octagron has an orange octagon base with four Pounder turrets around it and four Banshee auto-turrets between them. On top of its base, Octagron has a gray circular turret mount with a square wrapping it. On the edges of the square, Octagron has eight barrels that look like very short drone spawners, but are partially hidden Rocketeer barrels.

Octagron has a low movement speed and slowly spins. Its pounder turrets have decent bullet speed, damage, and penetration. Its auto-turrets have strong, fast bullets with medium health and damage. Octagron constantly deploys Rocketeer missiles in eight directions, which have high damage and speed but low health.

Despite having low movement speed and not much firepower, Octagron can still be deadly against many tanks. Its missiles can chop down a good part of health, while its bullets have high speed and require the player to always be on guard. Most of its bullets have a high range, so attacking from the long range will not change much. Bullet spammers can kill an Octagron, considering that they are focused and have high penetration.

If you are a bullet spammer, try to keep a medium distance from an Octagron, as its pounder bullets will be useless at that range. Make sure you either have some bullet spread or are spreading your bullets. This way, you will be able to handle all bullets. Always be vary of missiles, as they have high speed and can easily kill you if you are caught off guard. Try to always dodge in a left-right pattern, so that you can dodge more bullets. If you are dodging, concentrated, and having no other players around, you will be able to easily kill this boss. 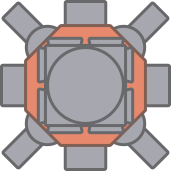 A high resolution image of Octagron 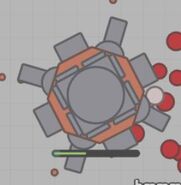 octagron in the death screen