Orange shapes and Orange Pentagon in particular were added secretly, without any reference in changelogs. Supposedly they were added during summer of 2019. As of March 10, 2020, Pentamancers are no longer able to infect these pentagons. This was reversed on 26 April 2020. On 5 May 2021, they were given the Torch ability and aura.

Orange Pentagons are slightly larger in size than normal pentagons, and have an orange color and aura.

Orange Pentagon has 200 health and gives about 50000 experience upon destruction. The Orange Pentagon can spawn over Pentagons or Green Pentagons with a 0.0016% chance and does not evolve further. It can extremely rarely spawn in the pentagon nest. It has the Torch ability.

A player discovered an Orange Pentagon 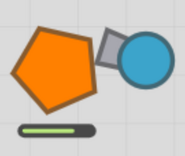 a Quantum Foam near an Orange Pentagon
Community content is available under CC-BY-SA unless otherwise noted.
Advertisement