The Poundbrid is a Tier 3 tank that upgrades from the Basebrid and the Pounder at level 30.

The Poundbrid features a circular body as well as a large, Pounder barrel facing frontward and an uncontrollable drone spawner facing backward.

The Poundbrid's primary gun fires large, strong bullets at a slower rate, like the Pounder itself. It also suffers a bit of recoil from firing its gun.

The Poundbrid upgrades from the

The Poundbrid can upgrade to the following: 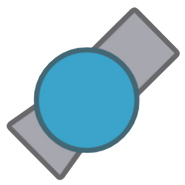 A high-res picture of the Poundbrid.
Community content is available under CC-BY-SA unless otherwise noted.
Advertisement