The Private is a Tier 3 tank that upgrades from the Minishot and the Basebrid at level 30.

The Private has a circular body with an average-sized gun in front with two smaller barrels beside it as well as a drone spawner on its back.

The Private upgrades from the

The Private can upgrade to the following:

The Private was suggested by Knightmare and was added to the game on January 24, 2020. 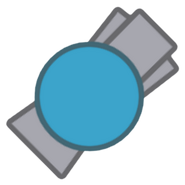 A high-res picture of the Private.
Community content is available under CC-BY-SA unless otherwise noted.
Advertisement