The Propeller is a Tier 2 Tank that upgrades from the Basic at level 15. The main focus of its branch is the thruster guns that give the tank more agility and recoil forward.

The Propeller has a circular body and a front gun identical to the Basic. It has two rear guns that are slightly smaller and angled slightly.

x0.7
The Propeller has mostly the Basic's firepower from its main gun. Its rear guns serve as thursters, using recoil to propel the tank at a faster speed than usual. These guns also deal much less damage and are not as powerful.

The Propeller upgrades from the

The Propeller can upgrade to the following: 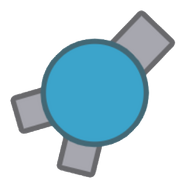 A high-res picture of the Propeller 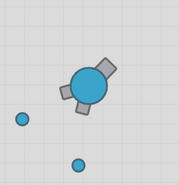 The Switcheroo in its Propeller form
日本語
Community content is available under CC-BY-SA unless otherwise noted.
Advertisement