Ingame
The Rotor, previously known as the Helicopter, is a Tier 3 Tank that upgrades from the Twin and the Propeller at level 30.

The Rotor has a circular body and a Twin gun on its front. Two small thruster guns are located on its back.

The Rotor's front bullets are a combination of the Twin's and the Propeller's.

This is nearly the same modifier the Propeller applies to the Basic, but with slightly lower penetration.

This is nearly the same modifier the Twin applies to the Basic, but with slightly lower penetration.

The Rotor's rear bullets are identical in power to the Propeller's.

x1
The rear guns of the Rotor provide forward recoil and help the tank move at a faster speed than other tanks, while its front guns provide a strong stream of bullets comparable to the Twin's. Aside from the Twin barrel and consenquently slower propel speed, nothing changed.

The Rotor upgrades from the

The Rotor can upgrade to the following: 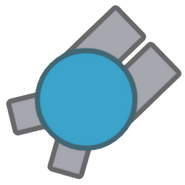 A high-res picture of the Rotor.