The S-Subduer is a Tier 3 Tank that upgrades from the Subduer and the Single at level 30.

The S-Subduer has a circular base and a two stacked barrels like the Subduer. Its gun has a small, slanted base supporting it.

The S-Subduer's gun is very similar to the Subduer's, firing two bullets at a time. Its bullets are powerful proportional to their size.

Like the Single, the S-Subduer has the ability to extend its camera in the direction it's facing by holding secondary fire. The camera will stay in that position until secondary fire is released.

The S-Subduer upgrades from the

The S-Subduer can upgrade to the following:

The S-Subduer was conceptualized by Hellcat and added to the game on April 1, 2019. 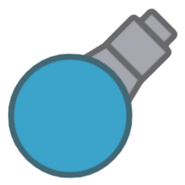 A high-res picture of the S-Subduer.
Community content is available under CC-BY-SA unless otherwise noted.
Advertisement