The Sassafras Supreme is a boss that was added secretly, no exact date is known. Currently, it is on the TESTBED bosses branch, mainly due to the fact of how blatantly overpowered it is.

Its spawn message is a massively extended "Oooooh hexy Hexen you are so spicy!"

Sassafras Supreme's minions have a hexagonal beige base with an eye in the center. Eye is wrapped in an orange hexagon with a short Doomsayer auto-turret behind it. Each minion has five barrels in front, aligned in a similar way to Quintuplet.

Sassafras Supreme has a very low speed, and massive health, far larger than most overpowered TESTBED bosses, and even higher than most X-K-X bosses, even EK-6 would have trouble fighting this boss. The bullets of Sassafras Supreme are by far the weakest ammunition. Extinctionist turrets have medium damage, same as Destroyer, high speed and mediocre penetration. Blocks have low health but high damage and penetration, capable of killing level 60 tanks from one hit. Sassafras Supreme also spawns six minions every 7.5 seconds, have high speed but low health. Bullets have decent penetration and speed, and surpisingly high damage. The strongest ammunition of Sassafras Supreme are its swarm drones: they have high speed, damage and health, exactly the same as Probationer drones. Swarm drones are spawned at an extremely fast rate, which makes boss so overpowered.

But even running away is a major problem. Firstly, if you are a very fast tank like Propeller branch, you have very high chances to escape. As soon as you see the boss or its minions - immediately run away. Other tanks have far higher problems - if Sassafras Supreme locked on them the player is usually screwed. If you are lucky enough to not have the boss locked on you, minions are still a threat. Since they have low health, you should spray your bullets and run away - this maximizes your chances to win.

Killing Sassafras Supreme is far harder than killing all normal bosses, and a vast majority of TESTBED bosses, so it will take a lot of players to kill it. There are not many strategies that will work, and one working strategy will require a lot of players on the same team. Firstly, you should get at least 14 coordinated players which will be in the same team, which is VERY unlikely. All of these players should be using Hexa Builders, and keep themselves close. Due to massive amount of swarm drones, you will not be able to hold Sassafras Supreme infinitely, but it will provide a shield that has much needed diversion. Then, you should get two Surges, which should only come into play when the boss will be completely distracted. They should stun the boss completely, and keep themselves as far as possible from the boss. Also, these two surges should have one player guarding them in case minions will lock on them. Then, try to get at least one tank with a very high DPS, like Flail or Splitter. This player deal damage to the Sassafras Supreme, and eventually kill it. Having 6-7 hexa builders attacking the boss is also helpful, which will make it fall even faster. 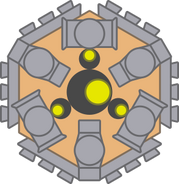 Minions and swarm drones of Sassafras Supreme attacking something

Sassafras Supreme locked on a player

Like all other Sassafras bosses, Sassafras Supreme is based on Diepmon's conception in EToD.