The Square is a very common and small shape in Woomy-arras.io

Square is about four times larger than an Egg, has four sides and yellow color.

Square has only 2 health, making it nearly harmless to the most tanks. Still, if a low tier tank rams square it will take decent damage, and even high-tier tanks may die to square if they have low health. Squares can be infected by most Underseer branch tanks, except Trimancer, Eggmancer and Pentamancer.

It is one of the weakest shapes, and spawns mainly at the beginning of a server to start the shape-evolution process. Square has three more variants, one spawned from sanctuary and another two rare variants. Poison Square and Sunburnt Square are the rare variants of it, while Giant Square is variant of square that is only spawned from Square Sanctuary and Bowed Sanctuary.

Square may evolve into the following:

Squares are a very good starting point if you have low level, and need to upgrade to the second tier. It is advised to either start farming from an egg or a square, so you can upgrade stats to be able to eliminate stronger shapes. After you reached third tier or higher, squares become far less viable as source of an experience. On higher levels, do not be afraid to ram squares as they will deal almost no damage to you.

A transparent image of a Square.

A transparent image of an Orange Square. 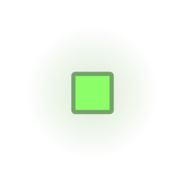 A transparent image of a Green Square.

A Splitter Square.
Community content is available under CC-BY-SA unless otherwise noted.
Advertisement