The Steamboat is a Tier 3 tank that upgrades from the Propeller at level 30.

The Steamboat has a circular body with an average-size gun in front, two small guns on its sides, and two small thruster barrels on its back.

Like the Propeller, the Steamboat fires average-power bullets from its main gun. Its side guns fire slightly smaller bullets that have the same health and damage as the front gun. Its two thruster guns fire much weaker bullets that are used to propel the tank forward.

The Steamboat upgrades from the

The Steamboat can upgrade to the following:

The Steamboat was an idea by Fillygroove and was added to the game on December 28, 2018. 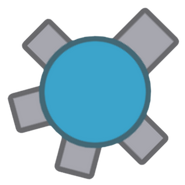 A high-res picture of the Steamboat.
Community content is available under CC-BY-SA unless otherwise noted.
Advertisement