The Terminus is a boss that was added on November 3, 2019, as a tournament suggestion by KoleOBlack.

The Terminus has a circular, maroon body with a basic barrel on the front. It has unique frag turrets revolving like the Revolutionist. It has a total of eight frag turrets.

The frags explode into a bunch of smaller bullets which will deal little damage but since there are so many, they could deal critical damage (especially when the main frag bullet is directly hit on the player). The turrets act just like the Revolutionist's ones. (they spin around, and fire when they see someone, also acts like turrets)

To counter this boss you'll need good defense or else the frags will shred you and then the Terminus will finish you off with the basic bullet. You will need around eight Hexa Builders to keep it's ammunition away from killing teammates. Now you need tanks with strong bullets as the storm of frags can easily destroy bullets, so you will have to use heavy damage tanks like Pounder. i'll finish this later alright? please don't edit this page, especially Mark.klele29! 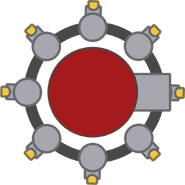 A high resolution picture of Terminus.

The update where Terminus got added, along with ROD-1.
Community content is available under CC-BY-SA unless otherwise noted.
Advertisement